As Abbott says Texas fixed all the causes of February's blackouts, a new report suggests otherwise 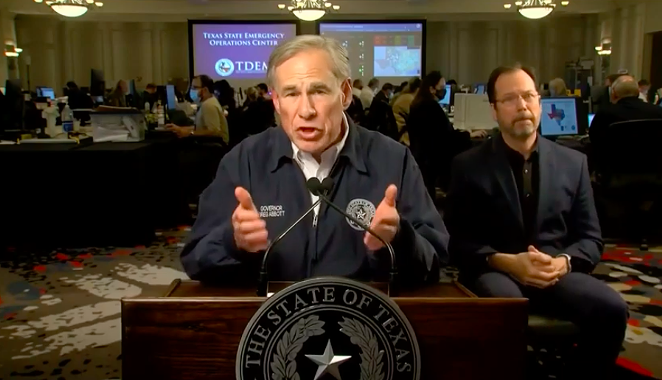 On Tuesday, Gov. Greg Abbott declared that a newly signed state law fixes "all of the flaws” that led to February’s deadly blackouts, but a report issued last week by five former Texas regulators warns that's far from the case.

The new law, passed by the GOP-controlled Texas Legislature, includes a mandate that energy companies "weatherize" their power plants to avoid future grid failures. February's statewide outages were one of the worst disasters in Texas history, leaving hundreds dead and wreaking billions in economic harm.

“The legislature passed comprehensive reforms to fix all of the flaws that led to the power failure,” said Abbott, a Republican, the Associated Press reports. He added: “Bottom line is that everything that needed to be done was done to fix the power grid in Texas.”

However, last Thursday, five past Public Utility Commission of Texas commissioners and a senior regulatory advisor issued a lengthy report warning that the bill passed by the Texas Lege don't go far enough. Their study calls for 20 additional reforms from both policymakers and regulators.

Among other things, the report calls for stronger enforcement measures against power plants and natural gas facilities to ensure they actually weatherize. It also calls on the state to acknowledge the implications of climate change on the grid and to require higher energy-efficiency building standards.

During the legislative session, Republican lawmakers repeatedly tried to steer debate away from acknowledging that climate change could worsen future weather disasters. Some also sought to deflect blame for the disaster away from the oil and gas industry by blaming renewable energy sources.

“As we fix what didn’t work right this February, we need to be fully focused on the future,” study co-author Pat Wood III, a former chairman of both the PUC and the Federal Energy Regulatory Commission, said in a press statement. “Perhaps sooner than anywhere else in the world, the future power grid is coming of age in Texas — due to our rich wind, solar and hydrocarbon base and our welcoming open market."

The former regulators' report bolsters weeks of criticism from energy experts, who have argued that the Legislature treated the state's powerful fossil fuels lobby with kid gloves as it debated reforms. Many criticized the bill for letting the Texas Railroad Commission, long accused of being too cozy with the petroleum industry, decide which natural gas suppliers must weatherize.

Study authors also said they hoped it would help Texas avoid the same mistake the state made when it was hit by a similar, though less severe, blackout in 2011. Had lawmakers implemented meaningful reforms then, Texas could have avoided February's catastrophe, study co-author Brett Perlman, a former PUC commissioner, said in a press statement.

“Over a decade ago, after the 2011 blackout, I criticized the stakeholder blame game that followed and suggested that our gas and power system needed significant reform to improve responsibility and accountability for reliability,” he said. “But Texas failed to make the required reforms and unfortunately — but predictably — experienced an even more serious disaster last February."