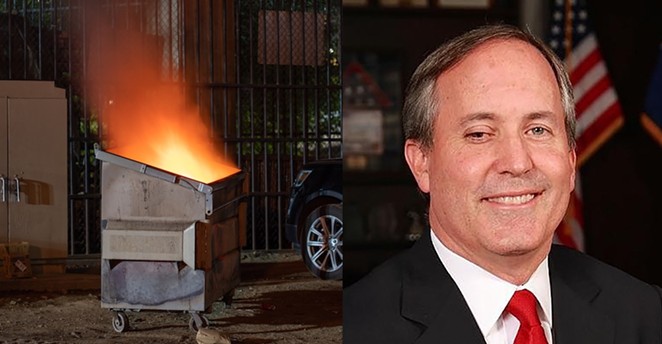 The Republican primary for Texas attorney general grew even more crowded on Monday when a dumpster fire burning behind an East Texas tire store entered the race.

Rachel Upstream, owner of Upstream’s Tires & XStream Custom Hubs in the town of Vidor, filed paperwork as campaign treasurer for the environmental hazard.

“The idea has been smoldering for some time,” Upstream said. “Our strategy is to ride the current sentiment that Attorney General Ken Paxton has already turned his office into a dumpster fire and play on our experience. Essentially, we’re fighting fire with fire.”

“We feel our odds are really good,” Upstream said. “The Land Commissioner’s own family disapproves of his fawning over Trump, even though his uncle, George W. Bush, approved and supported a war based on a lie that cost countless lives and wounded countless people. No number of portraits painted by the former president are going to erase that stain. Plus, Texans seem to love dumpster fires, as evidenced by that last legislative session.”

News of another primary challenger sent the Paxton campaign into a panic. Sources inside the AG's office said his backers are worried the foul-smelling inferno was capable of garnering more votes than the incumbent, who's facing legal woes including state securities fraud charges and an FBI probe into abuse of office.

As of press time Monday, Paxton's staff had already filed a flurry of emergency injunctions against the dumpster fire, saying it wasn’t qualified to run for political office. However, legal experts and political scientists warned that strategy is a slippery slope since the same case could be made against Paxton.

“Hello Kettle, I’m Pot. You’re black,” joked Geno Borchardt, a political science professor at Texas Wesleyan University in Fort Worth. “This is going to be a very difficult race for the attorney general. I see the dumpster fire, land commissioner and attorney general fighting for the same rabid, Republican base. Guzman faces an uphill battle as both a woman and a human being.”