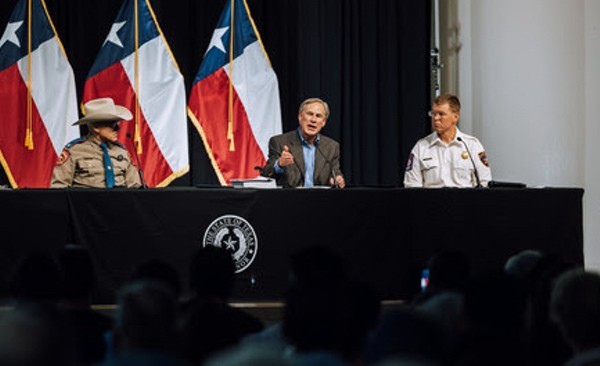 When it comes to the border, Gov. Greg Abbott certainly has a case of Selective Outrage Syndrome.

After spending years ignoring President Donald Trump’s cruel policies of caging kids, the Republican governor in April made flimsy accusations of child abuse at a temporary shelter set up for migrant kids in San Antonio.

And now, after declining to throw his support behind House Bill 2862, a proposal that fizzled in the Texas Legislature last session to fund work on President Donald Trump’s border wall with state dollars, Abbott last week announced he’ll do just that by a presumed executive order.

We say “presumed” here, because as of press time Wednesday morning the governor hadn’t provided details on how he plans to carry out what Trump couldn’t complete in four years, including where the money might come from. Signals now point to Abbott using some sort of crowdfunding, specifics of which he's likely to unveil Wednesday afternoon.

Already, groups including LULAC and the ACLU have pledged legal fights to shut down the project.

But such details don’t appear to matter much to Abbott, who’s no stranger to using the border as political theater.

Although he’s already grabbed a reelection endorsement from Trump, Abbott is desperate to stave off a challenge from the right during the primaries. He faces one from former State Sen. Don Huffines and could see another from firebrand agitator Allen West, who resigned as head of the Texas GOP as he mulls a run for statewide office.

Further backing from Trump would certainly help Abbott disarm such challenges, and what better way to achieve that than by stroking the former president’s ego by resuming work on his vanity project? The governor just has to hope he can keep pushing off the details long enough, so no one notices what an assclown folly he’s undertaking.