By Reese Oxner, The Texas Tribune 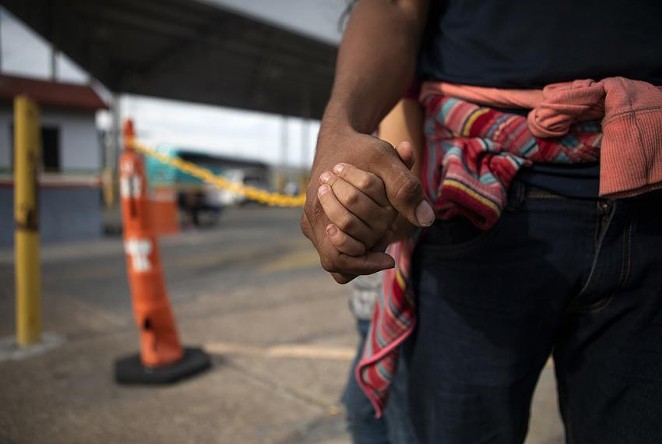 Texas officials have emptied a prison to prepare it to hold immigrants arrested by state troopers as Gov. Greg Abbott ramps up the state’s law enforcement presence on the border.

Officials began transferring prisoners Wednesday from Dolph Briscoe Unit in Dilley — a small city around an hour drive southwest of San Antonio — to other facilities with available capacity so the prison can be used as a central holding facility for immigrants arrested as part of Abbott’s Operation Lone Star, Texas Department of Criminal Justice spokesperson Jeremy Desel said in a statement. It will be used to hold immigrants who have been charged with state or federal crimes, he said. It is unclear what charges these could entail, and Desel could not confirm whether that would include low-level charges.

Officials have not yet started detaining immigrants in the facility, but it will have capacity for about 1,000 people. Desel confirmed the facility has no air conditioning, which is true about many prisons in the state. Weather forecasts for the area show highs surpassing 100 degrees next week.

“The state of Texas continues to deal with a record-high influx of individuals illegally crossing the border,” Desel said in the statement. “To address the ongoing crisis, Governor Abbott is directing state resources to arrest and confine those individuals crossing the border unlawfully and who have committed a state or federal crime.”

Plans for the prison were first reported by Keri Blakinger, a reporter with The Marshall Project.

The clearing of the prison began Wednesday — the same day that Abbott announced details of his plan for a Texas border wall, saying he would reallocate $250 million in funds from the TDCJ budget as a “down payment” while also soliciting private donations.

“State leadership has assured the agency that this is a temporary measure, and the money will be reappropriated without a negative impact on TDCJ,” Desel said.

Abbott referenced the available prison beds during his press conference Wednesday and said that the state may “need staff to staff those jail beds as well as others that may come up.” He said some states may send jail or enforcement officers to work with state agencies and local officials to meet staffing demands.

Desel said the prison’s current staff members — who total around 230 — will continue to staff the facility, and no external officers will be enlisted at this time. The TDCJ will provide “appropriate services” to those detained in the prison in conjunction with the Windham School District and the University of Texas Medical Branch, Desel said. But he said he couldn’t give details on what those services would include.

President Joe Biden and Abbott have continued to publicly spar over immigration policies as the number of immigrants crossing the border has increased. In March, Abbott launched Operation Lone Star, which deployed the National Guard and “air, ground, marine and tactical border security assets” to the border. The Republican governor declared the situation at the border a disaster on May 31. Biden’s administration has threatened legal action over Abbott’s previous order instructing state agencies to yank child care licenses from facilities that serve migrant children.

In his order, Abbott instructed the Texas Department of Public Safety to enforce all state and federal laws on trespassing, smuggling and human trafficking and ordered two state criminal justice commissions to provide guidance and request “any necessary” waivers to give counties “the flexibility needed to establish adequate alternative detention facilities.”

“The Texas Department of Criminal Justice (TDCJ), like other state agencies, is ready to assist in Operation Lone Star,” Desel said.