By James Barragán and Cassandra Pollock, The Texas Tribune 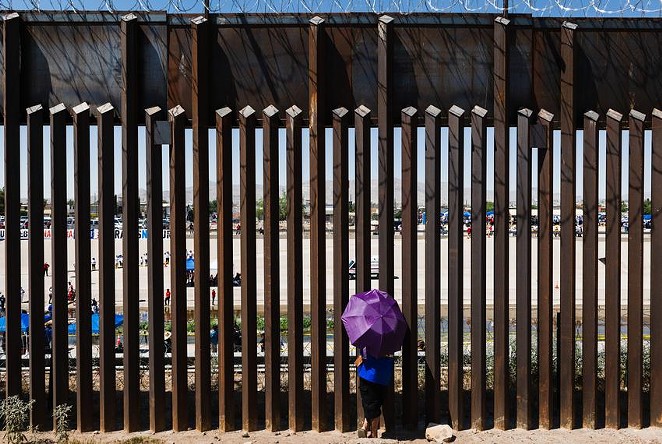 Over the past year, Gov. Greg Abbott has issued disaster declarations across the state for a number of tragedies: the coronavirus pandemic that killed more than 50,000 Texans, a winter storm that left millions of people in freezing temperatures without power for days, hurricanes and floods that wiped out homes and local infrastructure.

The disaster declarations give the governor broad power to suspend state laws and regulations that hinder a jurisdiction’s recovery from a disaster and to allow the use of available resources to respond to the disaster.

Then, on May 31, the two-term Republican governor who is seeking reelection next year took the unprecedented step of declaring a disaster for 34 counties based on an increase of illegal immigration at the Texas-Mexico border. The declaration allowed Abbott to request the reallocation of $250 million of legislatively appropriated funds toward a border wall construction project pushed by his office.

“It’s extraordinarily unusual,” said Jon Taylor, professor of political science at the University of Texas at San Antonio. “Traditionally, it’s used for natural disasters,” he added, though state law does allow for its use for some man-made disasters.

Abbott’s move raises questions about the executive branch’s emergency powers, rekindling concerns raised during the early days of COVID-19 last year when Abbott used his broad emergency powers to enact restrictions shutting down businesses to curb the pandemic. In response, the Legislature tried without success to rein in Abbott’s authority this session.

But now, critics are questioning whether an increase in illegal immigration constitutes a disaster that merits emergency action by the governor.

State Rep. John Turner, D-Dallas, said Abbott’s use of a disaster declaration to reallocate legislatively appropriated funds to a project from his office stretches the concept of emergency authority “to its breaking point.”

“A governor should not be able to circumvent the legislative process by declaring such matters to be emergencies and then implementing whatever measures he wishes,” Turner said in a statement. “If a governor can commence such a long-term, multi-hundred-million-dollar public works project under the cover of emergency powers, it is difficult to know what the limits of those powers are.”

“I hope the Legislature will reassert its authority and resist this ill-considered action by the Governor,” he added.

Under the Texas government code, governors are allowed to declare disasters for an “occurrence or imminent threat of widespread or severe damage, injury, loss of life or property resulting from any natural or man-made cause.” The code gives the executive branch broad authority that covers natural disasters, like fires, hurricanes,and storms, as well as man-made catastrophes like riots, hostile military action and cybersecurity events.

Renae Eze, a spokeswoman for Abbott, said the governor is acting together with leaders in both chambers of the Legislature, who signed off on his request to transfer legislative funds for the border wall last week. She said the action was warranted because of a 20-year record high of migrant crossings at the border.

“This is not a red or blue issue — this is a public safety issue,” she said. “President Biden’s reckless open border policies have led to a crisis along our southern border… Until the Biden Administration starts doing their job, Texas is stepping up to secure our southern border and protect Texans.”

In a news conference last week, Abbott acknowledged that his move stepped outside of the historical precedent for disaster declarations.

“I am unaware of a governor ever declaring a disaster at county requests because of the tidal wave of illegal immigrants coming across the border, wrecking havoc in communities and residents who live here in Texas,” he said.

Abbott said the flow of illegal immigration through the state had cost Texas billions of dollars and thousands of hours of staff resources while hurting border residents whose properties were damaged and lives were threatened. Eze said this week that the Department of Public Safety has also seized 95 pounds of fentanyl smuggled across the border this year, which puts other areas of the state at risk.

In 2019, President Donald Trump declared a national emergency at the border as he sought to fulfill a campaign promise to build a wall along the U.S.-Mexico border. Trump similarly said the emergency declaration was needed to stop illegal drug trafficking, human trafficking and gang violence.

Trump also faced backlash over executive overreach but his emergency order stayed in place until February when the Biden administration formally ended it.

Alberto Gonzales, a former U.S. Attorney General and Texas Supreme Court justice, said he generally supports having statutory authority within the governor’s office to respond to almost any kind of crisis because it’s hard to anticipate all the emergencies that might arise. Gonzales said he was speaking broadly because he did not have first-hand knowledge of the issues surrounding Abbott’s declaration.

Gonzales, now dean of the Belmont University College of Law, said his experience as White House counsel for President George W. Bush during the September 11 terrorist attacks have shaped his views of executive authority.

“Only the executive can respond quickly and decisively,” in unexpected emergencies, he said.

In exchange for allowing strong emergency powers, lawmakers should demand strict accountability once the disaster has passed, including complete disclosure of the actions taken by the executive branch and an accounting of how state funds were used, Gonzales said.

Abbott critics could still argue that an increase of illegal immigration does not meet the standards for a disaster declaration and gives the governor power he would not have under normal circumstances, Taylor said.

The disaster declaration allows the state to transfer money already appropriated in the budget to respond to the disaster. In this case, the state will transfer $250 million appropriated by lawmakers for the Texas Department of Criminal Justice to Abbott’s border wall initiative. State officials have said they will identify funding to replace that money in the agency’s budget.

Lawmakers who oppose the wall could argue that their authority over the state’s purse strings is being side-stepped by the governor for his own initiative.

“It’s absolutely an encroachment,” Taylor said. “That gives a lot more authority than what I think people interpreted under the Texas constitution. This has been a problem for legislature-gubernatorial relations since at least Ann Richards but definitely since [Rick] Perry. There's been a decided push to expand gubernatorial power whenever possible.”

Last year, Democrats and Republicans complained that Abbott had overstepped his authority through his orders to curb COVID-19. Democrats criticized the governor for not deferring to local officials, who they argued were better positioned to make decisions for their communities. And Republicans blasted Abbott’s orders to shut down businesses and require masks.

The Legislature debated curbing the governor’s emergency powers during this year’s regular session, but the Senate and House had different approaches to the issue and were unable to reach a compromise before lawmakers returned home.

The Senate rallied around two proposals by state Sen. Brian Birdwell, R-Granbury, that would have applied to all declared disasters. The legislation, which would have needed a sign off from Texas voters before it could take effect, would have required the governor to call a special session to declare a state emergency that lasts longer than 30 days. The special session would give lawmakers the chance to terminate or adjust executive actions taken by the governor, or pass new laws related to the disaster or emergency.

In the House, state Rep. Dustin Burrows, R-Lubbock, spearheaded House Bill 3, a sweeping piece of legislation that would have curbed emergency powers only during a pandemic as opposed to all disasters, which include hurricanes and tornadoes. Neither Burrows' nor Birdwell’s offices responded to requests for comment.

But neither of the Republican-dominated chambers seems opposed to Abbott’s use of a disaster declaration to tackle illegal immigration.

Lt. Gov. Dan Patrick and House Speaker Dade Phelan flanked Abbott at a news conference on the subject last week, and the respective chamber’s chief budget writers Sen. Jane Nelson, R-Flower Mound, and Rep. Greg Bonnen, R-Friendswood, signed off on the transfer of budgeted funds for Abbott’s “down payment” for the border wall.

Phelan, a Beaumont Republican in his first term as speaker, said earlier this month that lawmakers will debate curbing the governor’s emergency powers again “at some point” but deferred to Abbott on whether it will be included in a special session agenda. Phelan has said he sees no need for lawmakers to convene during natural disasters.

“Can you imagine trying to have a special session in an off-year, everyone coming up to Austin when they need to be back home taking care of their constituents?” Phelan said during an interview with the Tribune after the regular legislative session.

State Rep. Chris Turner, who chairs the House Democratic Caucus, said Abbott’s focus on immigration at the border is all about “politics.”

“I think the governor should have emergency powers in certain circumstances because emergencies do arise,” Turner said. But, he added, “the fact that Trump is going to tour the border with him next week is proof that this is more about Republican primary politics than it is serious policy.”

Abbott has dismissed those criticisms as “nonsense.”

Taylor said as long as the legislative and executive branches are dominated by the same party and agree on the issue being tackled by a disaster declaration, there is no incentive for lawmakers to try to rein in the governor’s power. Under those circumstances, Abbott may keep testing the limits of his office.

“It’s the idea of, he saw an opening, he took the opening,” Taylor said. “It suggests to me that he’s thinking ‘Stop me until I spend again.’”

But even if lawmakers do not push back on Abbott’s emergency power, Gonzales said valid questions remain. The governor’s opponents could argue in federal court that the state is usurping the federal government’s responsibility over immigration enforcement and preempt Abbott’s actions.

They could also challenge what constitutes a disaster.

Disclosure: The University of Texas at San Antonio has been a financial supporter of The Texas Tribune, a nonprofit, nonpartisan news organization that is funded in part by donations from members, foundations and corporate sponsors. Financial supporters play no role in the Tribune's journalism. Find a complete list of them here.