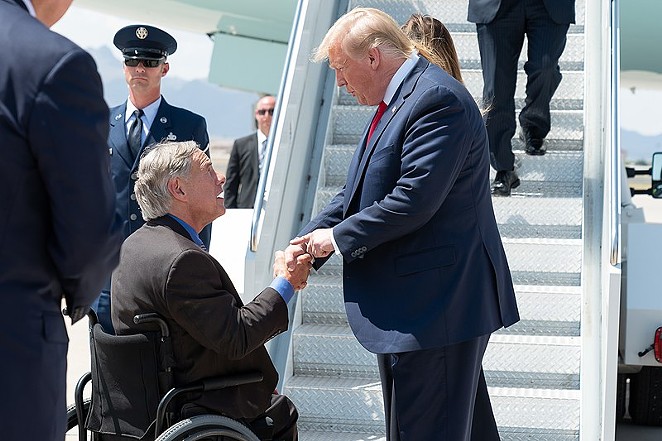 Gov. Greg Abbott and former President Donald Trump will engage in a photo op on the Texas border Wednesday, a capper to the governor's announcement that he'll spend state money to finish the reality-show president's border wall.

The two will hold an 11:30 a.m. briefing on border security, then tour a section of "unfinished border wall," according to an announcement from the Republican governor's office.

The meeting has a political upside for Abbott as he heads into the 2022 election season, and to some degree for Trump, who's repeated promises of a "big, beautiful wall" that Mexico would pay for went largely unfulfilled.

Given the propensity for both the governor and former president to engage in scenery-chewing political theater, a reality check is in order.

Construction of Trump's wall in South Texas cost roughly $26 million per mile, according to a Congressional analysis. That means Abbott's $250 million "down payment" on the wall isn't so much a drop in the bucket as it is a drop in an Olympic-sized swimming pool.

That's even true when coupled with the governor's crowdfunding effort for the wall that raised $459,000 in its first week. If money continues rolling in at that rate — and that's a very generous if — Abbott is still decades from building the "hundreds" of miles of border wall he promised.

Indeed, the governor has been short on details about the scope of his grand project, a timetable or even where it will go up. However, we do know that the 34-county disaster declaration he made to initiate the project is likely to face court challenges, since immigration is a federal responsibility.

And, to be sure, the border region isn't universally welcoming to Abbott's idea. This week, the governor was forced to amend his disaster declaration after 12 counties pushed back for being added without their consultation.

And that brings us to our next point.

2. The governor's move is entirely political.

Observers of Texas politics are quick to point out that Abbott's vagaries about the border wall are intentional. This is chest beating meant to appeal to hard-right voters ahead of the 2022 election. And if it helps keep Trump in the governor's corner as he looks to stave off a primary challenge, all the better.

If Abbott runs for the 2024 Republican presidential nomination, you can bet he'll try to get traffic out of it there too. He'll be the one candidate who can say he gave Biden the middle finger by rushing ahead to complete the centerpiece of Trump's administration.

Don't be surprised if you see dribs and drabs of purported wall "progress" from Abbott along the way. For example, the video he tweeted Monday showing a single small bulldozer pushing around dirt so that construction can begin. They won't add up to much, but they may keep the MAGA crowd sated for a while.

"Talking about it may be easy and beneficial to the governor's political purposes, but the idea that a wall is going to be built on the Mexican border is fantasy," Southern Methodist University political science professor Cal Jillson told the Current earlier this month.

3. Abbott's amped up rhetoric does nothing to fix the surge.

Immigration experts and lawmakers representing border districts have repeatedly pointed out that both the causes and solutions to the current immigration surge are complex.

Sure, asylum seekers saw the Biden administration as more welcoming than Trump's, but dwindling COVID-19 risks and spring weather also contributed, and as with prior surges, the number of crossings seems to be plateauing as dangerous summer weather sets in.

During a recent San Antonio appearance, U.S. Rep. Henry Cuellar, D-Laredo —  a lawmaker who hasn't been shy in calling out the Biden White House for its mishandling of border issues — had no kind words about Abbott's planned wall or his use of overheated law-and-order rhetoric on immigration.

Cuellar lambasted Abbott for seizing on the surge as a means to tweak Biden rather than working with federal authorities to fix a humanitarian crisis. The wall, the congressman added, is an expensive solution to a problem better solved by working with Central American countries to address its root causes.

"We're playing defense on the one yard line when we should be playing it on the 20 yard line," Cuellar said.