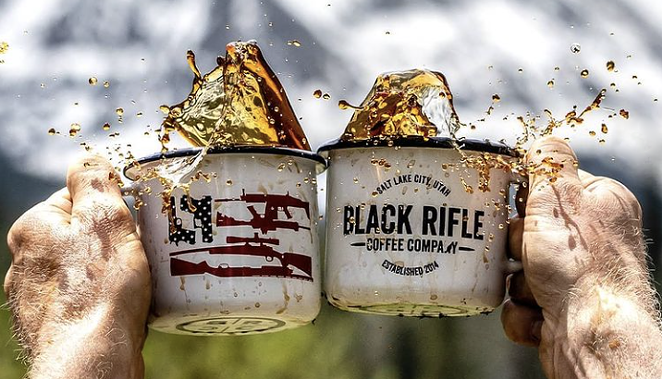 Now, members of those groups are threatening to find another coffee company to support with their MAGA money. Some, company officials told the Current, have even made death threats.

"I can’t just sit here and listen to the people who are sending me death threats, talking crap, calling me the worst names you can think of," Black Rifle co-founder Mat Best told the Current Monday. "Whatever. That’s fine, that’s their opinion."

The veteran-founded firm — which operates retail shops in SA and Boerne and a corporate headquarters in the Alamo City — was featured in the Sunday Times piece "Can the Black Rifle Coffee Company Become the Starbucks of the Right?" In the article, the firm's founders denounced the Proud Boys and other violent far-right groups that they say "hijacked" their brand's imagery.

For example, Kyle Rittenhouse — the Illinois teenager who killed two Black Lives Matter protesters in Wisconsin last summer — wore a Black Rifle shirt in his first post-jail photo. And multiple insurrectionists at the deadly January 6 Capitol siege were photographed in the company's swag.

"How do you build a cool, kind of irreverent, pro-Second Amendment, pro-America brand in the MAGA era without doubling down on the MAGA movement … ?” Black Rifle founder Evan Hafer asked the Times. “The racism [expletive] really pisses me off. Like, I'll pay them to leave my customer base. I would gladly chop all of those people out of my [expletive] customer database and pay them to get the [expletive] out."

Apparently, that came as news to some of Black Rifle’s customer base. Since the piece ran, right-wing social media has been on fire with comments from folks suddenly eager to switch brands.

"How to destroy your company in one easy step: give an interview to the New York Times trashing your customers," Raheem Kassam, editor in chief at the right-wing outlet The National Pulse wrote on Twitter.

How to destroy your company in one easy step: give an interview to the New York Times trashing your customers. pic.twitter.com/0qF6XMP5e8

Twitter user Florida Man — you can see where this is going, can't you? — added, "So glad to be getting rid of #BlackRifleCoffee from my social media and throwing all my gear away. I've got 6 shirts going in the garbage! Get woke, go broke!"

So glad to be getting rid of #BlackRifleCoffee from my social media and throwing all my gear away. I've got 6 shirts going in the garbage! Get woke, go broke!

The Times' report hints that BRCC's marketing strategy, which leaned heavily on the divisive language of our current era, may have gotten it into the uncomfortable place where it is now. But, co-founder Best said officials at his company felt little choice but to talk to the paper about the situation.

“The New York Times was going to do a story on us no matter what, and we thought we’d share some of the veteran-related causes that we work with, just to give them an understanding of our business, because the left-leaning media tends to rip us apart," he told the Current. “I don’t know what their agenda was, and it’s not out of the question to think there are people there who wanted to hurt our company, because we’re all gun-toting, freaking freedom-loving patriots.”

In the meantime, he added, it's business as usual — with or without Proud Boys buying his product.

"Literally, all we can do is just roast great coffee and support local communities," Best said. "Like we’ve always done."