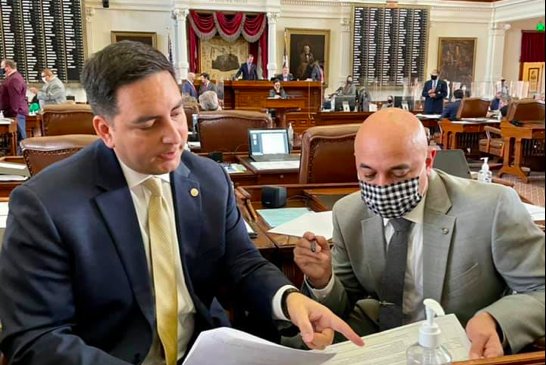 State Rep. Philip Cortez, D-San Antonio, returned to Texas Wednesday, saying he and a small group of Democrats will work to improve the controversial voting bill the lawmakers flew to Washington D.C. to protest.

“I proudly stood with my democratic colleagues and left Texas to ensure House Bill 3 would not be approved as introduced," Cortez said in an emailed statement. "A small working group of Democrats decided to begin active discussions here in Austin on improving HB 3 and asked that I return to establish open communication lines.”

Cortez added that he wants to "engage in good faith dialogue" to eliminate parts of the bill that would harm voters. Democrats have criticized the measure and a similar proposal in the Senate, saying the legislation would strip local elections officials of their authority and enable partisan poll watchers to intimidate voters.

"We need to fight this battle on parallel tracks in Texas and Washington D.C. with one goal in mind: full and open access to voting for all Texans,” Cortez said.

However, other Democrats dispute Cortez's claim that he's negotiating on their behalf.

"He made the decision to rejoin Republicans without speaking to the Dem delegation," State Rep. Gina Hinojosa, D-Austin, tweeted in a response to a report of Cortez's return.

To be clear, he is not negotiating on our behalf. He made the decision to rejoin Republicans without speaking to the Dem delegation.

In a statement to TV station KSAT, State Rep. Diego Bernal, D-San Antonio, accused Cortez of breaking his covenant with other members of the local Democratic delegation.

"The Bexar delegation all made commitments to each other, face-to-face," Bernal said. "Phil violated that. He left under cover of night without telling us. Disappeared. He knew what he was doing."