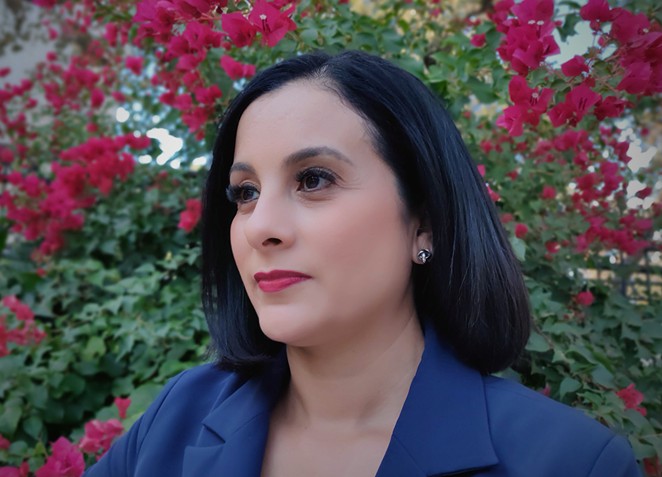 Minjarez is one of roughly 60 Texas Democrats who flew from Austin to Washington D.C. earlier this month to break quorum and block progress for House Bill 3, which Republican backers say will bolster election security.

However, Democrats and voting rights groups say the proposal — and others like it in statehouses around the country — are actually designed to make it harder for people of color and other likely Democratic voters to cast ballots.

We caught up with Minjarez on the phone to ask her about the Texas Dems' trip to Washington D.C. The group plans to stay clear of the Lone Star State until August 7, when the special session called by Republican Gov. Greg Abbott comes to an end.

You expect to come back to Texas in August, and Gov. Abbott has said he's prepared to keep calling special sessions until he gets a voting bill. If that's the case, what's your end game?

Look, we came on a mission, and that was to talk with our federal elected officials about the importance of passing national standards on voting. We came here collectively to sound the alarm about what was happening in Texas, to make them understand the suppression legislation that had gone through and passed in Georgia. We're talking to them and telling them, "Look, you all need to wake up and see what's happening with this type of legislation that's passing through our state legislatures."

We took this bold action, and it wasn't an easy decision, but it was the right decision at the time. We utilized the quorum break, which was a tool that's provided for us in the House rules. And we took bold action to wake up the country, to show everyone that this is a problem. There is an attack on our sacred right to vote. So, we are here with a mission to meet with all of our federal elected officials — those who will meet with us — and also getting word to the president that he needs to wake up. He needs to take action on this.

So, the governor can call all the special sessions he wants. He's facing a primary challenge from far-right opponents. He's doing this to rally his base. And when we are done here, we hope that Congress will take action. We will end up going home. We know special sessions are coming, but again, look at what [Abbott's] calling on for the special session. It's all red-meat issues geared toward the base. It's not anything that's going to help Texas. Nothing about the grid is on the special session call, dealing with Medicaid expansion. All that he's doing is playing a game.

Congress's voting-rights legislation, the For the People Act, seems to have shut down in the Senate. Is there really any hope it will be revived?

I think a number of things could happen. I met with Sen. [Amy] Klobuchar, D-Minnesota, who's the chair of the rules committee. Recently, she came out talking about a proposal of putting voting rights into the current infrastructure bill. And maybe through the reconciliation process, maybe getting something done there. Sen. [Joe] Manchin, D-West Virginia, has his views on passing his type of legislation. So, what it comes down to is, look, we don't care how you get it done. .... They have to work the way we do in the Texas Legislature. We have proposals, but we sit down, we negotiate and we come up with a bill that everyone can live with and be happy with. I'm confident that they can do the same on the federal level.

And it may not be in the form of one specific bill. There may be another maneuver. I'm hopeful that it can happen. [Tuesday], we had a meeting with majority whip [U.S. Rep.] Jim Clyburn, [D-South Carolina]. We asked him, "Is there enough time to get something done by August 7?" And he was very confident that there was. So, look, it's in their hands. However they do it, however they want to do it — as long as they get it done, that's something we can live with.

When you boarded that plane, some political observers said your intent was to force Republicans in Texas Lege back to the negotiating table. Given the partisan tone set by the governor, do you really think that could happen?

Well, you can see from what's been put out in the media, Greg Abbott is front and center. In the House of Representatives where we serve, though, we have a leader in Speaker [Dade] Phelan, [R-Beaumont]. We hope that he will step up as a leader that we had elected him to be, and to actually encourage his Republican members to reach out so we can come to some sort of agreement on this bill. I firmly believe they know there are problems with this bill. After the first time we broke quorum, they acknowledged later that there were provisions of the bill that were very concerning and that they didn't know how those provisions ended up in there. That was egg on their face. So, I hope that the speaker will learn that he was elected, not just by Republicans, but by Democratic members of the House to be a leader. And that he needs to step up against Greg Abbott and do what he needs to do so that we can get a functioning House going — so that we can complete our service to the state of Texas.

What are the provisions still in the current bill that you most want to see thrown out?

The one that really sounds the alarm to me is the provision allowing partisan poll watchers. Essentially, that provision ... gives them a really free rein at the polling sites. Unfortunately, under that provision, it says is that if they commit bad behavior, if they're harassing or threatening voters, a voter cannot go and complain to an election judge or a poll worker. The election judge and the poll worker have to actually see the bad act. And if there's a bad act committed that they witness, essentially all they can do is give a slap on the hand. They give a warning to the poll watcher. So, essentially, the poll watcher gets a slap on the hand, and they continue the bad behavior. And if the ... election judge or poll worker kicks them out, essentially [the election volunteer] is subject to criminal sanctions for doing that.

So, imagine going to the poll, then you have partisan poll watchers who are there just to cause havoc — for example, like the Proud Boys going in there. It's free rein for them to do whatever they want to do. Do you really think voters are going to want to go vote knowing that there are people behaving that way at the polls and that there are safety risks?

The other thing that's concerning to me is ... criminal sanctions against our election judges or poll workers, who normally tend to be seniors or retirees. Even if they make minor mistakes that can be easily fixed, they're subject to criminal action as well.

And then, the other thing that concerns me is the availability of 24-hour voting. I looked at what Harris County did because of COVID and how innovative the measures are that they took within the bounds of the law, and creating this 24-hour voting possibility. .... This is a great tool for shift workers, for policemen, for fire, for healthcare professionals, nurses, oil field workers —  people who don't work traditional hours. They were not shut out of the process. And I think what's happening here is that instead of creating a piece of legislation to really make voting accessible to all, all it's doing is ... making it really making it hard for Texans to vote. It's not a free system, and it's not a fair system. This bill is very dangerous.