Police in a Northwest San Antonio suburb nabbed a man whom they accuse of flinging more than 20 bags of cat poo along a stretch of roadway, including some that landed on residents' driveways and school crosswalks.

In a Facebook post, the Fair Oaks Ranch Police Department said it arrested Donald Erwin Schwartz, 71, on July 20 and charged him with illegally dumping between 5 and 500 pounds of waste along Dietz Elkhorn Road.

Authorities said they became aware of the incidents after reports from residents and city workers. Eventually, police identified a "suspect vehicle." 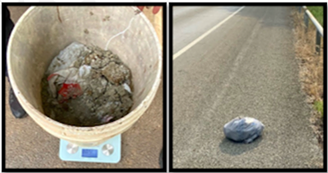 Fair Oaks Ranch cops said they made their arrest after they observed the driver of the vehicle they identified hurl "two large bags of bags of feces out the passenger side window." The total weight of the waste in those two sacks, according to police: 59 pounds.

Erwin was booked into Bexar County Jail and later released on a $1,000 bond, according to authorities. They added that he'll likely face additional charges.