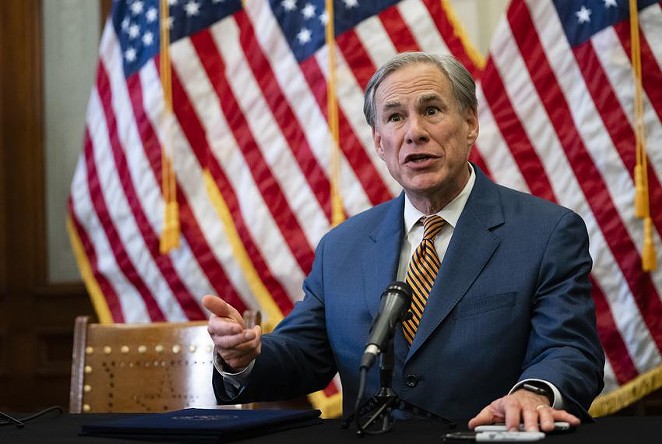 Apparently, rhetorical consistency is about as high on Texas Gov. Greg Abbott's agenda as ensuring his constituents have a working power grid, are safe in their schools and can easily vote.

On Thursday, the Republican governor fired off a tweet blasting President Joe Biden's announcement of new requirements for large employers to ensure workers either get vaccinated or face weekly COVID-19 tests.

Calling the mandate an "assault on private businesses," Abbott pledged that Texas, or its GOP leadership anyway, was working to thwart Biden's "power grab."

And here's where the tragicomic part comes in: "I issued an Executive Order protecting Texans’ right to choose whether they get the COVID vaccine & added it to the special session agenda," Abbott declared in his tweet.

If you've been paying attention, you're then aware that Abbott's tweet trumpeting Texans' right make individual health choices comes days after he signed a law banning the majority of abortions in the state.

That law, now being contested by the U.S. Justice Department, would outlaw 85% of abortions performed in Texas under the old rules. Even though the law has been touted as an abortion ban at six weeks, experts point out that most women will have just a two-week window during which to realize they're pregnant.

Biden’s vaccine mandate is an assault on private businesses.

I issued an Executive Order protecting Texans’ right to choose whether they get the COVID vaccine & added it to the special session agenda.

Texas is already working to halt this power grab.https://t.co/TwoQMhDxoM

Clearly, Abbott is talking out both sides of his mouth when it comes to matters of choice.

But, then, the governor has made it clear during his time in office that the choices of one constituency — that of Republican primary voters — outweigh those of anyone else he was elected to represent.