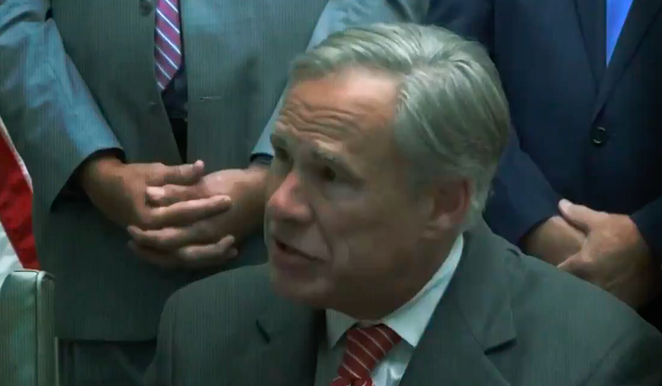 In an internet ad shared Monday, the group seized on Abbott's floundering defense last week of Texas' near-total abortion ban. The GOP governor made headlines by trying to play down a question on the law having no exception for victims of rape and incest by saying Texas will "eliminate all rapists from the streets."

In seven years as Texas Governor, 12 as Texas Attorney General and five on the Texas Supreme Court, Abbott has failed to "eliminate" rape, text flashing onscreen during the new ad points out.

"Here's an idea Greg: Why not put a bounty on rapists?" the text inquires. "Or do you just want a bounty on women?"

One of the most controversial aspects of Texas' new abortion law the creation of $10,000 bounties as an incentive for people to file civil suits against anyone who helps a woman who obtains an abortion in violation of state rules.

.@GregAbbott_TX has had 24 years in state leadership to “eliminate all rapists,” yet this year Texas leads the nation with the most incidents of rape.

The Lincoln Project was founded by long-time GOP political consultants angered by their party's direction under Trump. With the former president at least temporarily out the picture, the PAC has turned its attention on Trump-emulating GOP leaders including Abbott and Florida Gov. Ron DeSantis.

While some political observers criticized the group for failing to drive turnout in battleground states, others argued that it shook up the White House by acting as a "squatter in Trump’s mental space."

With 15 months to go before Texas' next gubernatorial election, pundits will have plenty of time to debate whether the Lincoln Project has much bearing on Texas politics.