By San Antonio Current Staff
Share on Facebook
Tweet
Submit to Reddit
Email
San Antonians have plenty of local spots they know and love, but there have been some standouts over the years that have gotten national attention. Here's all the restaurants that have been featured on shows on the Food Network, most notably on Guy Fieri's Diners, Drive-Ins and Dives.
OF 22
PREV NEXT
The Cove
606 West Cypress St., (210) 227-2683, thecove.us
Guy Fieri first visited The Cove during season four of Diners, Drive-Ins and Dives for the “Totally Unexpected” episode. Yep, Fieri really loved that The Cove is a restaurant, car wash, laundromat all in one. He loved it so much that he came back and had a Latin-spiced lamb burger as part of the “Best from the Road” episode where he revisited all of his favorites.
Photo via Instagram / devotedexistence
La Panadería
301 East Houston St., (210) 592-6264, lapanaderia.com
Back in summer 2017, Guy Fieri stopped by the then-brand new La Panadería in the heart of downtown. The season 27 Diners, Drive-Ins and Dives episode titled “A Passport of Flavor” looked at the authentic bakery that serves up real-deal sourdough just like in old school Mexico City. Guy also made the bakery’s best-selling item, the tequila almond croissants.
Photo via Instagram / l_rosario2
Two Bros. BBQ Market
12656 West Avenue, (210) 496-0222, twobrosbbqmarket.com
It’s safe to say that all of Chef Jason Dady’s restaurants got national attention when he appeared on Top Chef: Texas in 2011 and Iron Chef Gauntlet in 2017. Dady’s cherry-glazed baby back ribs have especially gotten attention as they’ve been featured on the Food Network’s site, too.
Photo via Instagram / s.a.vory
Luther's Cafe
1503 N Main Avenue, (210) 729-5093, facebook.com/LuthersCafeSA
Luther’s is a fave for late-night eats and drag shows that give us life. The Main Avenue spot was featured on the “Ooey, Gooey and Cheesy” episode of Burgers, Brew & 'Que for its meatloaf sandwich wrapped in crispy bacon and drenched with an egg.
Photo via Instagram / rogersaurus_mex
Fat Tummy Empanadas
2922 W Commerce St, (210) 383-6415, fattummyempanadassa.com
During a busy fall season, Guy Fieri did himself some good by visiting Fat Tummy Empanadas with Diners, Drive-Ins and Dives. Watch the “From Sandwiches to Stroganoff” episode to see Fieri get his fill of these delicious empanadas.
Photo via Instagram / sanantoniomunchies
Smoke Shack
3714 Broadway St., (210) 957-1430, smokeshacksa.com
Josh Denny brought his Ginormous Food to San Antonio and was sure to spotlight Smoke Shack. As part of the “Everything’s Bigger in Texas” episode, Denny stopped by this Broadway ‘cue spot and tried the Big Mac Daddy. You know, the two-foot-long bun topped with pulled pork, brisket, sausage links, sauce and meaty mac & cheese. More recently, Guy Fieri stopped by SS for Diners, Drive-Ins and Dives for the "Burgers, Bacon and BBQ" episode.
Photo via Instagram / joshiethefoodie

Luna Rosa Puerto Rican Grill y Tapas
2603 SE Military Dr #106, (210) 314-3111, lunarosatapas.com
As part of a new FN show titled Triple D Nation, Guy Fieri returned once again to SA. For the "Piling on the Pork" episode, Fieri sampled Caribbean nachos and chuleta kan-kan pork chops.
Photo via Instagram / hungrytravelingmama
Texas Pride Barbecue
2980 TX-1604 Loop, Adkins, (210) 649-3730, texaspridebbq.net
In season three of Diners, Drive-Ins and Dives, Guy Fieri was sure to hit up Texas Pride for the “All Kinds of BBQ” episode. Guy totally recommends the best-selling brisket paired with a side of baked beans.
Photo via Instagram / 4u2chawaii
Dignowity Meats
1701 E Houston St, (210) 462-1496, dignowitymeats.com
It should come as no surprise that Guy Fieri came to town to spotlight the East Side gem that is Dignity Meats. As part of his famed Diners, Drive-Ins and Dives, Fieri stopped by for the “Regional Recipes” episode, billing the spot as an East Coast-Texas deli known for its smoked meats.
Photo by Lizzy Flowers
Los Barrios
4223 Blanco Road, (210) 732-6017, losbarriosrestaurant.com
Los Barrios has gotten plenty of Food Network attention thanks to celebrity chef Bobby Flay. On the second episode of FoodNation with Bobby Flay, he visited restaurants across the Alamo City, some of which have since closed. At Los Barrios, Flay cooked with chef/owner Diana Barrios-Treviño and prepared a “Tex-Mex Fiesta.” On the “Puffy Tacos” episode of Throwdown with Bobby Flay, he learned all about puffy tacos as Los Barrios is famous for its shredded chicken taco. Flay ended up losing to the San Antonio chef because he didn’t use fresh masa.
Photo via Instagram / eat_it_b
Skip ad in
Wrigleyville Grill
602 Northwest Loop 410 #146, (210) 369-9833, wrigleyvillegrill.com
During a fall that lead to a number of FN spotlights back-to-back, Guy Fieri selected Chicago eats spot Wrigleyville Grill to get a shoutout. The food personality showed off the hot dogs, gyros and more during the “From Sandwiches to Stroganoff” episode.
Photo via Instagram / jasonuribe
Dough Pizzeria Napoletana
6989 Blanco Road, (210) 979-6565, doughpizzeria.com
Dough may be prized for its… dough, but it was actually the Blanco Road’s pork that landed it on season 11 of Diners, Drive-Ins and Dives. Guy Fieri stopped by to try the homemade pork sausage and prosciutto during the “Porktastic” episode.
Photo via Instagram / fedmanwalking
Tycoon Flats
2926 North St. Mary's Street, (210) 320-0819, tycoonflats.net
Season two of Burgers, Brew & 'Que brought host Michael Symon to Tycoon Flats. In the “Brisket for Breakfast” episode, he tried the St. Mary’s Strip restaurant’s signature fried apple bacon bleu cheese burger.
Photo via Instagram / la_aventurera_
The Magnolia Pancake Haus
606 Embassy Oaks Ste 100, (210) 496-0828, magnoliapancakehaus.com
Magnolia has gotten a shoutout from celebrity chef Guy Fieri on Diners, Drive-Ins and Dives twice so far, y’all. On “Ultimate Bacon Fest,” Guy traveled across the country and ended up at this San Antonio spot for bacon waffles. Yum! Then, on “Breakfast, Lunch and Dinner,” Magnolia’s dominance in the morning meal sector was highlighted for its old school pfannkuchen from a decades-old recipe.
Photo via Instagram / begordasmx
The Granary ‘Cue & Brew
602 Avenue A, (210) 228-0124, thegranarysa.com
On the first-ever episode of Eat, Sleep, BBQ, host and barbecue chef Rashad Jones came on down to San Antonio in the “Brisket: The King of BBQ” episode that explored the meat being used in innovative ways. During his visit to The Granary, he sampled the barbecue brisket ramen noodles.
Photo via Instagram / s.a.vortooth
Soluna
7959 Broadway Street, St #204, (210) 930-8070, solunasa.com
Crave host Troy Johnson brought the Food Network show to this Mexican spot for its “Spicy Food: Taste the Pain” episode. Over at Soluna, Johnson tried the restaurant’s chips and the “extra spicy” salsa made from a mix of hot peppers. He even made his own salsa blend, which may have fell a bit short from Soluna’s.
Photo via Instagram / eat_it_b
De Wese's Tip Top Cafe
2814 Fredericksburg Road, (210) 732-0191, facebook.com/tiptopcafesanantonio
Tip Top Cafe has been featured on Diners, Drive-Ins and Dives not once, but twice! Guy Fieri honored this Fredericksburg Road spot as a timeless classic that is family run. In another episode, Fieri highlighted its place a comfort food classic, particularly concerning the roast pork.
Photo via Instagram / lizarrdqueen
Taco Taco Cafe
145 East Hildebrand Avenue, (210) 822-9533, tacotacosa.com
Guy Fieri featured this Hildebrand taco spot twice, in “Crazy for Chicken” and “Slammin’ Sammies.” During his visits, he tried the shredded chicken fried puffy tacos and the tacos de lengua. He was skeptical about the tacos, but was hooked from the first bite.
Photo via Instagram / suellenjparker
Bun 'N' Barrel
1150 Austin Hwy., (210) 828-2829, bunnbarrel.com
Whatever you may think about it, the fact remains that Diners, Drive-Ins and Dives has paid a visit to Bun ‘N’ Barrel. As part of the “Grillin’ and Smokin’” episode, Guy Fieri stopped by the longtime drive-in for the burgers and smoked brisket made with Thai heat.
Photo via Instagram / moneyshotphoto
Moroccan Bites Tagine
5714 Evers Road, (210) 706-9700, moroccanbitestagine.com
Guy Fieri brought his Diners, Drive-Ins and Dives to San Antonio in season 12 for the “From Kraut to Couscous” episode. Over at Moroccan Bites, Fieri was all about couscous at the family-run restaurant.
Photo via Instagram / irishninjafit
Skip ad in
Big Lou’s Pizza
2048 S WW White Road, (210) 337-0707, biglouspizza-satx.com
Most people remember when Big Lou’s was featured on Travel Channel’s Man v. Food, but the East Side pizza spot also made an appearance on the first-ever episode of Ginormous Food with Josh Denny. Titled “Everything’s Bigger in Texas,” national viewers got to see Big Lou’s 62-inch pizza that’s as big as a table.
Photo via Instagram / worldrally_black
Beto's Alt-Mex
8142 Broadway Street, (210) 930-9393, betosaltmex.com
Guy Fieri was sure to some to San Antonio for the “Latin Street Food” episode of Diners, Drive-Ins and Dives. During his season 12 visit, Fieri tasted Beto’s modern take on empanadas, which come in 14 different varieties.
Photo via Instagram / wander.eats
More slideshows 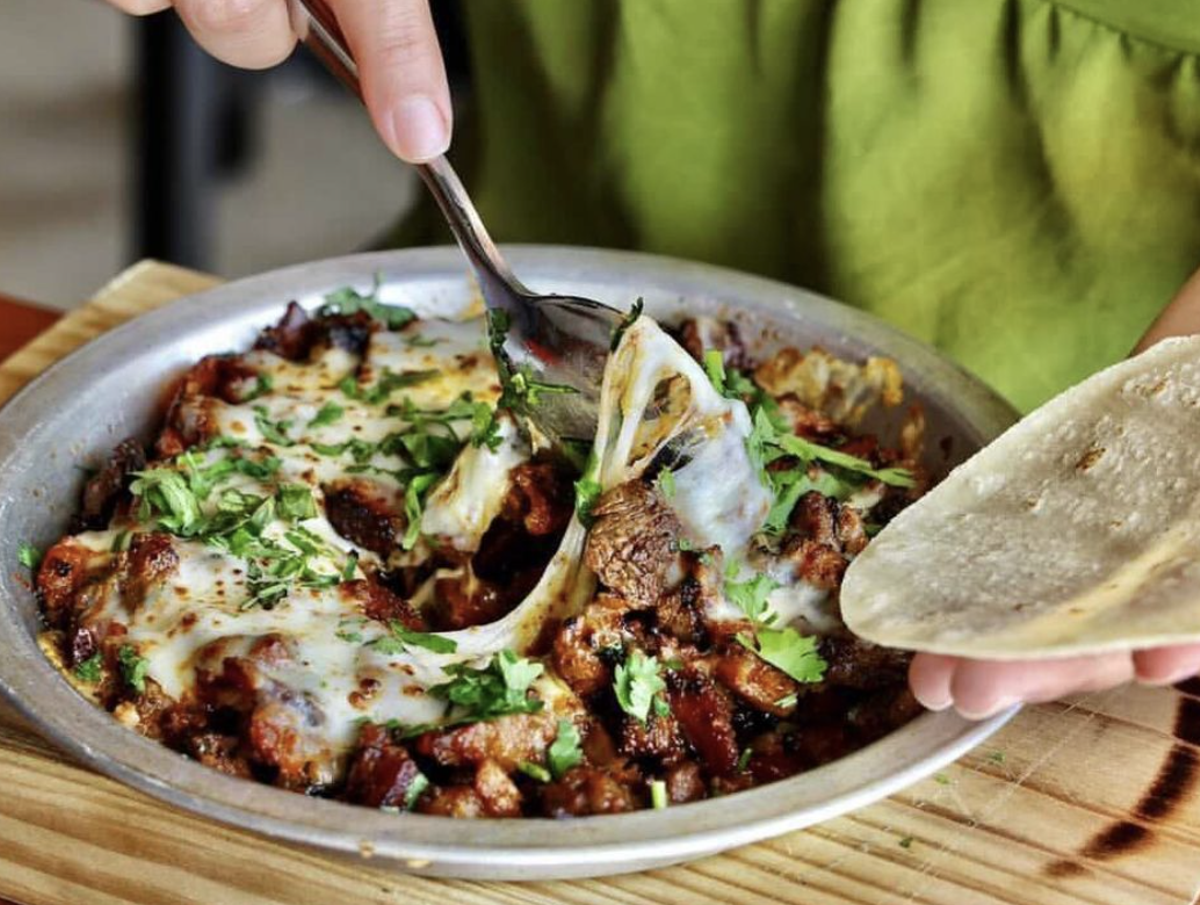